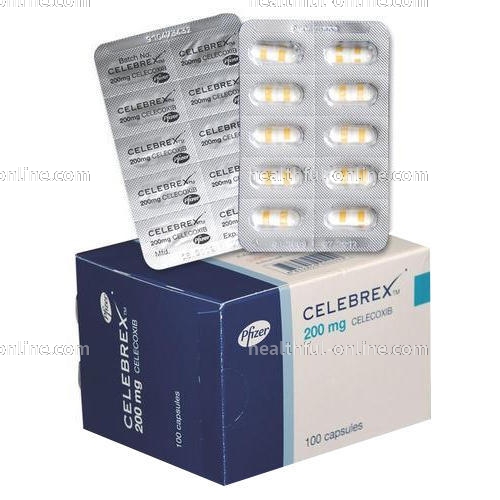 Celebrex is used to relief pain, fever, swelling, and tenderness caused by osteoarthritis, rheumatoid arthritis, and ankylosing spondylitis. Celebrex does not prevent the progression of either type of arthritis. It reduces only the symptoms and signs of arthritis. Celebrex is also approved for the relief of acute pain and the pain of menstrual cramps (primary dysmenorrhea). Celecoxib has been approved for patients with familial FAP who have not had their colons removed.

Celecoxib is a nonsteroidal anti-inflammatory drug (NSAID) that is used for treating arthritis, pain, menstrual cramps, and colonic polyps. Prostaglandins are chemicals that are important contributors to the inflammation of arthritis that causes the pain, fever, swelling and tenderness. Celecoxib blocks the enzyme that makes prostaglandins (cyclooxygenase), resulting in lower concentrations of prostaglandins. As a consequence, inflammation and its accompanying pain, fever, swelling and tenderness are reduced. Celecoxib differs from other NSAIDs in that it causes less inflammation and ulceration of the stomach and intestine (at least with short-term treatment) and does not interfere with the clotting of blood. NSAIDs have been found to prevent the formation and reduce the size of polyps in patients with the genetic disease, familial adenomatous polyposis (FAP). In FAP, patients develop large numbers of polyps in their colons, and the polyps invariably become malignant. The only cure of FAP requires removal of the entire colon. Celecoxib is approved as an adjunctive (secondary) treatment among patients with FAP. The cramping and pain during menstrual periods is due to prostaglandins, and blocking the production of prostaglandins with Celecoxib reduces the cramps and pain.

You should take the missed dose as soon as you remember. If it is almost time for the next dose, skip the dose you missed and take only the next regularly scheduled dose as directed. Do not take a double dose of this medication unless your doctor directs otherwise.

Celebrex capsules should be stored at 25 degrees C (77 degrees F). It is acceptable to briefly store it at temperatures between 15-30 degrees C (59-86 degrees F).

No restrictions on food, beverages, or activity while taking Celecoxib exist unless otherwise directed by your doctor. Concomitant use of Celecoxib with aspirin or other NSAIDs (e.g., ibuprofen, naproxen, etc.) may increase the occurrence of stomach and intestinal ulcers. Fluconazole (Diflucan) increases the concentration of Celecoxib in the body by inhibiting the breakdown of celecoxib in the liver. Therefore, treatment with Celecoxib should be initiated at the lowest recommended doses in patients who are taking fluconazole. Celecoxib increases the concentration of lithium (Eskalith) in the blood by 17%. Therefore, lithium therapy should be closely monitored during and after therapy with Celecoxib. Persons, taking the anticoagulant (blood thinner) warfarin (Coumadin), should have their blood tested when initiating or changing Celecoxib treatment, particularly in the first few days, for any changes in the effects of the anticoagulant. Persons, who drink more than 3 alcoholic beverages per day, may be at increased risk of developing stomach ulcers when taking NSAIDs, and this also may be true with Celecoxib. Celecoxib has not been studied in pregnant women. In animal studies, doses that were twice the maximally recommended dose were harmful to the fetus. Celecoxib should only be used in pregnant women when the benefits outweigh the potential risk to the fetus. The use of Celecoxib in nursing mothers has not been evaluated.

Even though stomach and intestinal ulcers occur with the use of celecoxib, their incidence is less than with other NSAIDs in short-term studies. Celecoxib does not interfere with the function of the blood platelets and, as a result, does not reduce clotting and lead to increased bleeding like other NSAIDs. The most common adverse effects are headache, abdominal pain, dyspepsia, diarrhea, nausea, flatulence and insomnia. Other side effects include fainting, kidney failure, heart failure, aggravation of hypertension, chest pain, ringing in the ears, deafness, stomach and intestinal ulcers, bleeding, blurred vision, anxiety, photosensitivity, weight gain, water retention, flu-like symptoms, drowsiness and weakness. Allergic reactions can occur with celecoxib. Individuals who have developed allergic reactions (rash, itching, difficulty breathing) from sulfonamides (e.g., Bactrim), aspirin or other NSAIDs may experience an allergic reaction to celecoxib and should not take celecoxib.

Make sure to notify your doctor immediately if you develop abdominal pain, tenderness, or discomfort; nausea; bloody vomit; bloody, black, or tarry stools; unexplained weight gain; swelling or water retention; fatigue or lethargy; a skin rash; itching; yellowing of the skin or eyes;"flu-like" symptoms; or unusual bruising or bleeding. These symptoms could be early signs of dangerous side effects. Should you experience any of the following serious side effects, stop taking celecoxib and seek medical treatment or call your doctor immediately: an allergic reaction (difficulty breathing; closing of your throat; swelling of your lips, tongue, or face; or hives). Other, less serious side effects may be more likely to occur. Continue to take celecoxib and talk to your doctor if you experience flatulence or diarrhea; dizziness; headache; or insomnia. Side effects, other than those listed here, may also occur. Consult your doctor immediately about any side effect that seems unusual or that is especially bothersome.

Thanks from my husband and me. Your internet shop has overpassed all expectations. Thank you for flexible professional service and our full sexual life. - Justin Mavis.